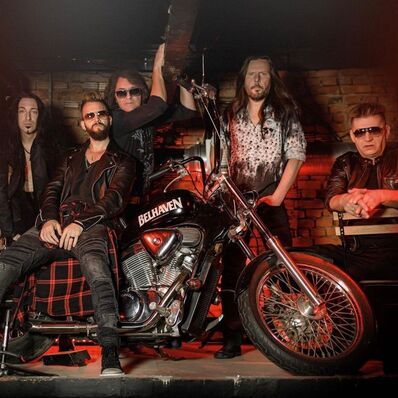 Firm on the classical eighties solid hard rock they are as great as their ideals Whitesnake, Queen and Guns n’ Roses. Reds'cool sound as if these ideals were young and crisp and back in the here and now.

The brilliant REDS’COOL musicians win over with precise, virtuosic play, the singer with his exceptionel expressive,
sexy, velvety-raspy voice, performing effortlessly the width of their songs from feeling and poignant to cocky, powerful, hard and heavy.
​
Reds'cool rock music is classical and new at once, with metal, grunge and blues elements, cleverly written, perfectly performed and mastered, catchy tunes with crossover-effect like Bon Jovi.
​
REDS’COOL enthuse their audience (knocking both their fans and the doubtful I-never-heard-of-them-before-audience off their socks) and are highly appraised by the press and their co-musicians.
​
This is why they got tons of stage experience.
They shared stage with:
Whitesnake, U.F.O., ACCEPT, Kingdome Come, Black Star Riders, Gotthard, Glenn Hughes, Doro, Kansas, Nazareth, Lordi, Magnum...

and performed at festivals like:
Hard Rock Hell AOR Festival (Wales), Rock of Ages and Masters of Rock and recently the Harley Days...
In actual formation under their name REDS’COOL they have produced two studio albums with
Davy Vain and Michael Wagener:
2013 – Bad Story
2015 – Press Hard (SPV/Steamhammer)
and are actually working on the next one.
​