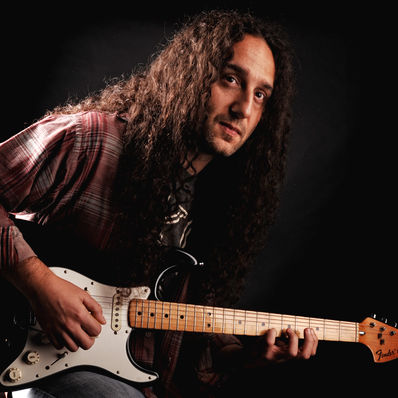 Vincenzo Grieco was born in Rome on August 23rd , 1976. He obtained his diploma at the Liceo Scientificohigh school when he was 19. He began to study modern guitar when he was 13, with the musician Giorgio Mazza; in 1999 he went to the C.I.A.C School of Music, where he studied with Giorgio Mazza, attending Jazz, Rock and Fusion workshops. He specialized in rock music with Simone Sello, with whom he approached the recording room. He studied the musical improvisation and the guitar technique as well as harmony and modern arrangement. He also studied musical reading and solfeggio. He specialized in the jazz study with the maestros Francesco Lo Cascio e Stefano Micarelli. In June 2000 he obtained his diploma in modern guitar at the C.I.A.C. School of Music.
Professional and artistic experiences: In 1995 he presented a song in Castrocaro and reached the semi-final phase. Since 1998 he played with different bands; with Rosso Fisso (Dance Funk band, performing in the best discothèques of Rome and Latium); he was the guitarist of Sound Forge (dance band, that plays 70’s, 80’s, 90’s songs, with soul, funk and black influences, performing live in the best discothèques as Gilda, Piper, Kill Joy, Alpheus); then he played with Latin Power (Ricky Martin cover band, with the South American singer Robie Robles). He was also a member of a fusion band, Bluestorm, that plays songs by Stern, Corea, Yellow Jackets and Weather Report (blues quartet, playing songs by Janis Joplin, S.R. Vaughan and others). Since 2000 he has been playing with the band “Acusting” (cover band, acoustic and jazz arrangement of Sting and Police) obtaining a lot of success in the best jazz clubs of Rome). Now he’s a member of Noises (rock-fusion quartet, playing original music, with a next recording project). Since 1999 he has been working with the musical-theatrical performer Gianni Silano in ‘Iattatiro’, playing original songs for kids (by Gianni Silano) in the most important theatres of Italy. This led him to play in 2005, in the live show ‘Art Attack’ with the TV showman Giovanni Mucciacca. On December 6th 2000 he was selected by the national magazine ‘Chitarre’ to play as emergent guitarist at the Teramo Theatre in the performance in honour of the guitar player/song writer and singer Ivan Graziani. There he played an original instrumental song, written by himself. He collaborated with the studio ‘Domani Musica’. In 2006 he became a member of the band of Jessica Morlacchi, ex leader of ‘Gazosa’, which participated in the ‘VALLETTA SUMMER FESTIVAL’ in Malta, held on July, 7th and 8th 2006. Teaching experiences: for many years he has been giving private lessons; in 99 he gave lessons of modern guitar in a European community project, at the C.I.A.C. School of Music. In 2000 he became a teacher at the C.I.A.C. School of Music in Rome. Since 2000 he has been teaching modern guitar also at the NEUMA School of Music. In 2002 he taught modern guitar at the school MONDO MUSICA and at the Liceo Newton high school in charge of the C.I.A.C. School of Music. In 2003 he collaborated with the Associazione Culturale Paupasia where he directed collective lessons of music and guitar technique. In 2003 he directed the rock music workshop at the CIAC School of music. In 2005 he created the Hard and Heavy workshop at the C.I.A.C. School of Music where he teaches young musicians to play music of groups such as Deep Purple, Dream Theatre and Hard Rock of the 80’s. Since 2003 he has been preparing a musical workshop at the “Istituto Professionale Rossellini Cine TV” high school, in collaboration with the C.E.T. by Mogol, for the ROMAROCK-ROMAPOP project promoted by the City of Rome. From 2006 to 2010 he has been teacher at the SONUSFACTORY School of Music.