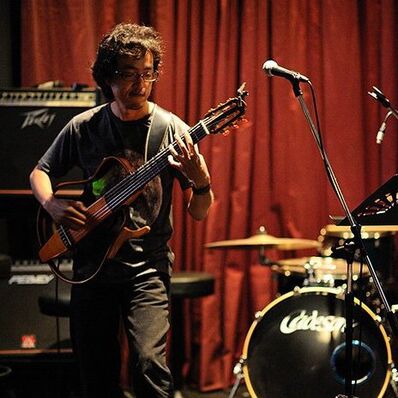 At the age 13 - I met the music of The Beatles and then I started to be crazy for all kind of music. I have two big brothers who also used to play guitar.
They made me interested in playing the guitar.
15 - I started playing acoustic guitar and then became addicted to classical music. 16 - I started to learn classic guitar at a local school. 18 - I learned classic guitar at a special music school for 4 years. 21 - Bronze prize winner as a soloist at the Japan guitar contest.
22 - Silver prize winner as a guitar teacher from the Japan guitar contest.
I started to teach the guitar as an instructor at a music school. 25 - I started performing the guitar live as a solo musician.  2004 - I visited to Thailand for the first time and I really loved it.
I decided to move  to Thailand in the near future when I went back to Japan.
2005 - I moved to live to Chiang Mai from Japan.
I started perfoming the guitar with Thai musicians at local restaurants and on the street every weekend at the Sunday walking street Chiang Mai.
Then, I got lots of local fans.  2010 - I started posting my clips on Youtube, many people came to watch them and started to be interested in my permance.
2011 - I moved to live in Bangkok from Chiang Mai, and performing the guitar at restaurants and teaching the guitar.  I appeared on local Thai TV programs. 2012 - I performed at the Bangkok Music Fair.  Yamaha Thailand Artist.