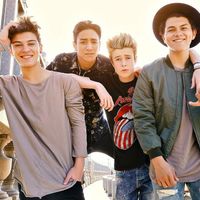 Up-and-coming boy band New District was recently nominated for a TEEN CHOICE AWARD this year for “Choice Music, Next Big Thing.” The band was created by worldwide talent search company ISINA and features five talented guys from different parts of the world who bring a modern twist to the classic 90’s boy band style. The band consists of Jaden Bojsen, Devin Dressman, Sean Cavaliere, Dylan Rey, and Julian Martel. The boys are currently being played on Top 40 in major markets (LA, NYC, MIAMI, CHICAGO) around the country and recently performed at the KIIS FM station in LA as part of the ARTIST NEXT UP PROGRAM. The music video for their single, “Closer," was produced by Grammy nominated Producer Emile Ghantous (Pitbull, JoJo, Prince Royce), has gained over two million views on YouTube, and with the current momentum behind them, they are sure to keep tugging at the heart strings of their fans. Their single "Closer" was the #1 requested new single for Radio Disney Mailbag and was also featured on SPOTIFY FRESH FINDS in their new artist program. Their second single, "Ain't Got Money" will be released on August 19, 2016, and the music video was just released less than a week ago and has already received over two million views.

Closer (Behind The Scenes Video)