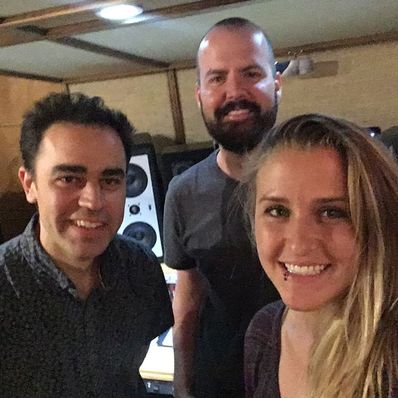 Lō is a Los Angeles-based band inspired by Phantogram, Metric and NIN. It consists of songwriter/vocalist/engineer, Brooke Villanyi, songwriter/producer, Ramsey Noah and producer/engineer/songwriter, Luke Tozour. ...About Ramsey: Before entering Berklee College of Music, Ramsey had already placed in the UNISONG International Song Contest and had played guitar, bass, flute and keyboards in two Texas bands. As a fourth year college student, he has also run a jingle business in Boston, successfully placing multiple original jingles with regional New England companies. During his time at Berklee, he also became interested in soundtrack style music and scoring to picture. Upon graduation he accepted a position working with the composer for the CBS drama, CSI: Las Vegas. He was nominated for Best Classical Piece (one of seven finalists) and Best Instrumental Piece (one of ten finalists) in the 2015 American Songwriting Awards. He has also written songs with Chikara Ricky Hazama, a successful producer, arranger and songwriter in the J-Pop & K-Pop genres (such acts as SMAP, BoA, EXILE, Kanade). Two of Ramsey’s songs co-written with the acid jazz unit, Flow Factory Frequency, “Blue on Blue” and “Dreams” can be found on iTunes.

Currently he is working with GRAMMY® award-nominated producer/engineer Luke Tozour to develop a new catalogue of pop, alt pop/indie pop, adult contemporary and americana songs. Along with the amazing songwriter and vocalist/engineer Brooke Villanyi, they are working on an EP of alternative songs that will be released late 2017 as well.

Ramsey Noah is also fluent in Japanese (spoken and written) and is an avid listener of Japanese music. He is highly interested in collaborating with Japanese artists that want to perform/record songs in both English and Japanese.