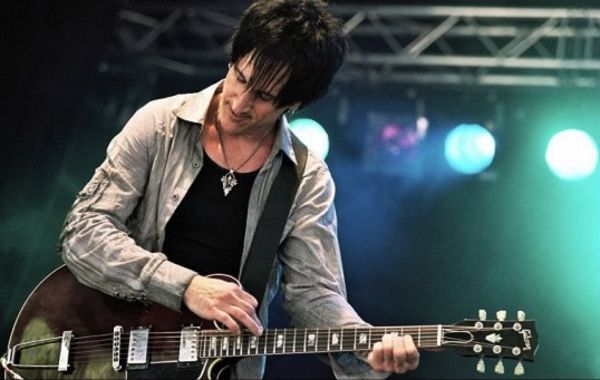 Legendary guitarist Steve Fister is joining our ISINA team. He has performed and recorded with many artists such as: Steppenwolf, Bon Jovi, King Kobra, Quiet Riot, Tony Franklin, Joe Satriani, Marco Mendoza and Ricky Phillips. His songs have also been featured in the Rock Band video game, as well as on HBO, ABC, NBC, Saturday Night Live, Showtime, “E,” VH1, MTV, Fox Sports, the Howard Stern show and the History Channel.
Fister has played guitar with many diverse, and talented artists. He served as guitarist and musical director in Lita Ford’s band, on her worldwide tours with Bon Jovi, Yngwie Malmsteen, and Poison. He has toured and recorded  with, The Pat Travers Band, Micheal DesBarres, John Kay and Steppenwolf, Stu Hamm, and Jack Casady.

Fister has produced 9 solo records, including the his "Live Bullets" which reached #2 on the European Blues charts. His current release is entitled "The Tri-fecta" / "A Triple Threat" includes the stellar rhythm section of Ric Fierabracci and Ray Brinker.
For his own music, Fister gets back to basics. He has stated that, “Melody and song content is priority one, but at all times I try to keep the drama and excitement levels high." Rhythm tends to play a large role in his albums, but he also focuses on both melody and emotion. Fister explains, “It is very important to retain a live but refined dynamic feel in the studio. Rather than over producing the guitar parts, I try to keep an open honesty, letting the feel of the song dictate my approach."

Steve Fister blends the guitar wizardry of Jeff Beck with a bluesy 70's hard rock vibe, punctuated with the melodic sense of The Beatles. (Nightwatcher’s House of Rock”)
“Guitar ace Steve Fister joins the ranks of today’s rising guitar superstars, and offers undeniable proof of his stature as a masterful solo artist”. (Robert Silverstein in 21st Century Guitar)
Steve Fister will be working with the guitar department, headed by Frank Gambale. Steve brings with him experience in both playing the instrument and producing others. He has an ear for melody and talent, and is a great addition to our already amazing ISINA team.