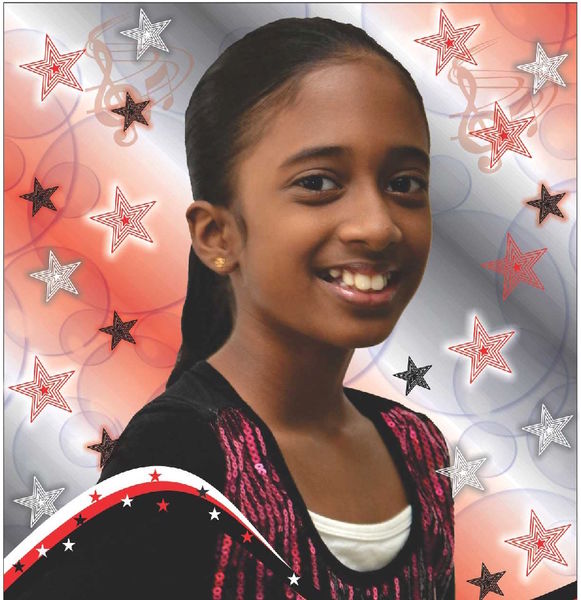 Ealisa Hallie Espinoza was born into her tiny island paradise of Trinidad and Tobago at seven months, weighing in at 2 lbs. 10 oz. and struggling for life for 21 days in an incubator. However, it was not long before everyone started to discover there was something special about this tiny child, as she was speaking in sentences at age 10 months, and singing entire songs in pitch at age 2 years. She began professional vocal training at six years old, and at age 8, the tiny island girl became youngest child to win the national Sanfest Primary and Secondary School talent competition and, in the same year, placed second in both the vocal solo and vocal duet categories at the biennial Musical Festival South. At age 9 she received the special prize for singing in National Trinbago Kids got Talent, where she quickly became known as “The little girl with the big voice”, and later that year she won the S.M. Jaleel Karaoke competition held at Gulf City Mall, and is still featured on the company’s website. She was the youngest vocalist to showcase at the AMBBCON Caribbean Music Conference 2013 at Movie Towne, for visiting foreign music executives, and has appeared several times on National TV stations, including ACTS 25, Synergy TV, CNC3 “Morning Brew” and WIN TV. In 2014, she was also featured in Sweet T&T Magazine June edition, and the Ministry of Youth and Gender Affairs newspaper supplement for Children Who Inspire. Also in 2013, she became the youngest registered performing artist on the Trinidad and Tobago Ministry of Arts and Multiculturalism National Artist Registry and still holds that title presently.

Ealisa’s love for music and theatre continued to grow, has played leading roles in six musical productions at Naparima Bowl over the past six years with her group “The Trebles of T&T”, and will be playing one of the leads in the 2015 production of “Out of this world”. She recently appeared in the RG Musical Productions 2013 and 2014 concert at Naparima Bowl, and placed third in the RG Musical Productions annual More Than Just Talent Competition in 2014. In 2015, she won first prize and trophy for best vocalist in this competition. She again placed second in the vocal solo and vocal duet categories at the Youth Music Festival 2015. Ealisa sings annually at “Carols by Candlelight” concert at President's Grounds for Christmas, and also does several live performances over the Christmas season at Malls and other public events. As a dedicated member of the Trebles Youth Choir, Ealisa sings at her church every other Sunday morning and performs at various public and private functions and many charity events. She is often called upon to sing the National Anthem of Trinidad and Tobago at official government functions.

Ealisa is a true overachiever, and besides vocal training classes, Ealisa has been a Girl Guide since age eight. She also studies Guitar, Piano, Ballroom Dance, and Swimming, each with a different coach. She has already attained merit passes in Grade 1, 2 and distinction in grade 3 Vocal, and merit passes in grade 1 and 2 and distinction in grade 3 Music Theory at Trinity Guildhall. Ealisa graduated Valedictorian, Class of 2014, Vistabella Presbyterian School, with the award for best all round student, and the award for music. She also passed SEA for her first choice, and placed in the top 5% in the island. She now sponsors her Primary School’s graduating class award for music each year. Ealisa continues to excel academically, and was awarded the certificate for most improved student in her first term in form one of her secondary school, and came in first in class in term 3. She has already performed in two musical productions at Naparima bowl, produced by her new secondary school, Holy Faith Convent, Penal.

Her most recent and record breaking accomplishment was representing Trinidad and Tobago at the World Championships for Performing Arts in Hollywood, California, USA, from July 8 2014, which is the largest and most prestigious Olympic style talent competition in the world. There, she entered the maximum five categories of singing allowed, where she won silver medals in Broadway, Gospel, Pop, and World Music, and a bronze medal in the Open category. Ealisa now has the honour of becoming the youngest performer in the entire Caribbean to win a medal in all five categories of competition in the 19 year history of the event. While she was in Los Angeles, she performed in a charity concert hosted by the Citizens and Friends of Trinidad and Tobago, an organization which raises money to help needy children in Trinidad and Tobago.

This year, Ealisa was nominated for the National Youth Award of Trinidad and Tobago for her outstanding record in Music in her country. Ealisa has already decided that her life and talent should be spent in service to children. Leading by example, she donates any money she receives from her singing performances to a home for abandoned children, “Outstretch Hands” in South Trinidad. She hopes someday to make her mark on the world through music. With her small size and big heart, she is already an inspiring citizen, of which Trinidad and Tobago can be proud.