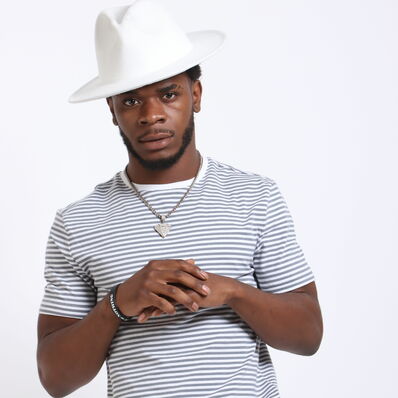 Ahmen, also known as Prince but better known as Iowa's hottest upcoming artist "KinngZeussy" moved to Denver, Colorado in 2004 at the age of five from Liberia, Africa. When he was three years old, Zeus's mother was murdered by rebels in his village. Zeussy also has a twin sister who was kidnapped by rebels but doesn't remember much of her, yet sadly, he still remembers seeing his mothers body carried out on the stretcher. Fast forward some years later, Prince graduated high-school, aged out of foster care and set out to become his own person. Throughout Ahmens life he's felt a sense of calling to help make the world a better place and it's that same sense that got him into the music industry. What better way is their to help change the world if not through music? In February of 2018, he was incarcerated for seven months and shortly after this, his life and mindset changed forever. The Kinng became homeless, he lost his power, respect, friends and lover. Those he once called family no longer claimed him, those who once looked up to him were now looking elsewhere for leadership and guidance. Lo and behold, this wasn't the end! Meanwhile sleeping on the pavement, Zeus remembers a feminine figure coming to him in a dream telling him to "get up, there's still more to come. Get up, you're not finished". On October 27th, 2020 Ahmen released his hit single "PAIN" and well you've seen how great it's done. Prince is now currently working on his 30 song album "TheForgottenKinng".