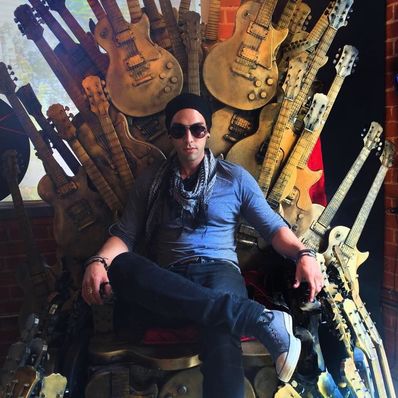 Ignacio Val was born in La Paz Bolivia, where he was raised at an early age involved in the musical world. At thirteen he began to take singing, guitar and dancing Lessons. Over the years and with little training he began to perform small concerts for his family and friends on different occasions.

Determined to establish an international career, Ignacio moved to Los Angeles, California, where he began attending the academy "Musicians Institute". It is there where he got inspired to create and produce his own sound and start writing songs based on his personal experiences. The artist faced the challenges and obstacles of the music industry and managed to excel thanks to his dedication and perseverance. His songs caught the attention of the audience and the media in South America, especially in Bolivia, where he has achieved great success in radio play and cultivating several followers.

Ignacio's greatest inspiration are his parents, who gave him an infinite amount of love and support. On the one hand the great influence of his father, Jorge Alvéstegui, a successful promoter and producer in music and television, who worked with a variety of artists such as Julio Iglesias, Chayanne, José Luis Perales, and Joan Manuel Serrat. On the other hand, his mother, Tatiana Brozovich, a successful businesswoman who worked in contributing to the development of her country and women rights, used to astonish him continuously for his determination to give a better life to him and his siblings. Before their death, his two parents taught him the importance of having an exceptional work ethic and a tenacity to fight for his dreams, which Ignacio has long since established.

Living in Los Angeles Ignacio has created a space for his music in the North American market, acting in several renown places such as the Microsoft Theater with Latin-international artist Marisela, as well as in the Latin Grammy Street Fair. He has shared the stage with a collection of world artists such as Alejandra Guzmán, David Bisbal, Dulce Maria, Espinoza Paz, La Santa Cecilia and Luis Fonsi. A big pivot point in his career was when he joined Franco de Vita through his Tour in Bolivia, where he sang a duet with him, Franco’s famous single "Si La Ves".

In 2013, Ignacio released his self-titled album, which was well received by critics and audiences in his country. Five songs of this work were positioned number one of the most important radios, won the prize "Best International Artist" and "Best International Song" in the Bolivian Awards "Stereo 97", awarded by the radio of the same name.

In summer of 2015 Ignacio Val released his first single in English, "All About You", which features electro pop sounds, demonstrating the versatility of the artist, this song generated very good criticism and an excellent reception with his audience.

In September of 2016 Ignacio released "No Me Interrumpas La fe" which he co-wrote with Ximena Munoz and Andres Torres who also produced the single. This song brings a very fresh sound with Folk / Pop influences and talks about the ups and downs that has had the artist throughout his career and the experiences he had in his thirteen year career. This single is very important since it is the starting point for the new beginning of Ignacio Val, this marks a transition from conventional pop rock to Christian pop folk.

In April 2017 the artist released his most recent single "No Dejes De Latir", the first song in his repertoire where you can hear Bolivian folkloric elements, and which already has more than 100 thousand reproductions in social networks and also reached the first places in the rankings of different Bolivian radios.

Christian music has been a very big influence since the beginning of Ignacio’s career, who feels that it is time to follow the calling he had several years ago, to make an album to God. He has the necessary human team, he found the style he was looking for and he feels the capacity and the maturity to deal with the responsibility that comes with this genre.

Ignacio Val is a man of faith and has always shown it. He knows that he has a calling and has been characterized as an artist with purpose, who believes in using music to help those who have less. His humanitarian work for children led him to be named World Vision International Ambassador, a global charity working with families and communities to address the challenges of poverty and injustice.

Ignacio Val has proven to be a multifaceted artist, it is clear that his music is liked and will transcend for many years.