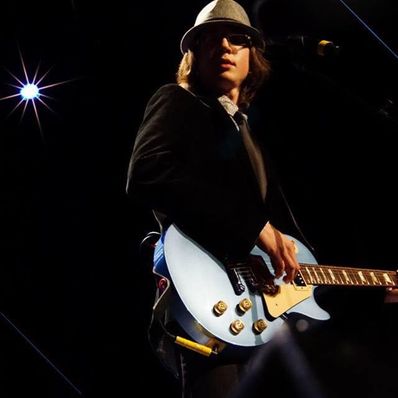 Hayden Rabinovitch is a 15 years old musician, singer, songwriter from Montreal, Canada. Hayden is the lead singer and lead guitarist of the Record Breakers band. Hayden has been playing music since he was a little toddler. He plays many instruments but guitar is by far his favorite instrument. He's performed in many shows already across the city and for fortunate to perform at such iconic venues as the Corona Theatre and Club Soda just to name a few. This coming July, Hayden will be performing at the Montreal International Jazz Festival and he was fortunate to be part of the Montreal Beatles Day with his band back in September 2014. This event marked the 50th Anniversary of The Beatles coming to Montreal in 1964. Another highlight of his summer, will be his upcoming performance on June 20 at Strangers in The Night 11, a very important Fundraiser for the Startlight Foundation. Hayden and his band will open the event and Blue Rodeo will close it. All of this while being an honour student at school. Hayden and his band just released a single on iTunes called Highway Blues. Available for $0.99. You can follow Hayden on facebook at www.facebook.com/HaydenRabinovitch and on youtube at justnatrabin. Hayden would love the opportunity to learn from amazing teachers and mentor in L.A. Thank you and looking forward to hearing from you.