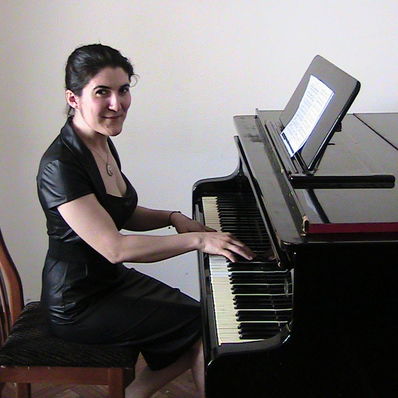 Young Musicologist.MA on Musicology,Music Education.Preparing for doctora.Speak in 4 languages like native.Can sing in every language,no matter,European or Asian.Multi-instrumentalist,Arranger .Playing with hands and feet.
Passionate for multi-genre singing.Lives on Caspian shore,feeds pets and cows.Loves family,healthy lifestyle,nature,kids and old vinyl records very much.Married.
Full Bio : Laman Leiba (Maiden:Sariyeva) is a young and perspective musicologist of new generation in Azerbaijan. Born in Baku , January 15,1988.
At early childhood music talent showed itself and according parents advice Laman studied at Elementary Music School named after Fikret Amirov in Sumgayit on speciality piano, then in 2002 ,successfully passed exam under applauses to enter Special Music School named after Bulbul in Baku.
In 2003, according her researcher analytical skills she transferred into Music theory section.
In 2006 Laman Leiba entered Baku Music Academy on Musicology as major field. Her scholarship differed from others and Laman studied many disciplines with more than 5 well-known Azerbaijan composers,such as Aqshin Alizadeh,Elnara Dadasheva,Nariman Mamedov,Nazim Mirishli and got Kara Karayev stipend.
In 2008 been at many audiences of different masters of voice singing in Azerbaijan,Laman decided to take individual operatic singing classes.But cancelled due to some reasons.
In 2011 Laman Leiba studied journalism at Media Academy at ANS (Azerbaijan News Agency) TV channel by support of the USA Embassy in Baku and Foundation of Chingiz Mustafayev and got certificate from US Embassy.Exactly on that day, June10,2011, she was invited by professor Khatira Hasanzadeh to make debut as a special guest-lecturer and first musicologist of her age/generation on 90-minute TV program “Musiqi xəzinəsi” ( “Music treasure”) live on AzTV (Azerbaijan State Television Channel).
In september, 2011,Laman Leiba entered Azerbaijan State Pedagogical University to study Master Degree on Musicology and Music Pedagogy. In 2013 she successfully graduated Mastery with her dissertation on new theory about Kara Karayev’s ballets.
In may,2012 Laman Leiba participated in VII International Leyla Gencer Voice Competition in Istanbul, Turkey.
During one year , 2012-2013,Laman worked as a Music teacher in one of Baku’s public school no.12 and there taught music to more than 470 kids.
In 2013 Laman took part in II Republic Forum of Talented and Creative Youth and took master-class from famous Italian singer Robertino Loretti.Also Laman took master-class from Milan conservatory docent Davide Gualtieri.
On 17th of January, 2013 ,Laman was again invited to TV program “Music Treasure” by Khatira Hasanzadeh ,now on Medeniyyet TV (Culture TV) and successfully told about composer Musa Mirzayev’s heritage.
During September,2014-January,2015 Laman worked as Music teacher at Lyceum no.6 , Baku. In short term she used to teach more than 350 kids in active learning manner and in creative atmosphere. Kids learned to make own handmade music instruments and use virtual instruments apps and etc.
In 2015 Laman Leiba registered her company Music Art Port Inc., which prepares exclusive music projects for Azerbaijan such as handmade music boxes with Azerbaijan folk tunes and going to make business in mechanical music distribution in Azerbaijan and abroad.
During these years of active study Laman also published several articles in some of Republic scientific conferences materials digests and authoritative magazines.
Now I am busy on writing book and making new musical projects such as participation on new "Azerbaijan got talent" TV-show,playing on Big Piano carpet with feet.
Note: I arrange music at home and also record my voice myself with favourite softwares and have not any in-ear monitors or mastering process in my records and that's why I am sorry for technical mistakes.As an artist, I don't like to waste my time playing every day in clubs or restaurants or anywhere else like that.I wish to contribute huge projects ,such as tournee,musicals, opera movies or animation films.
Thanks for attention & Good luck to all!