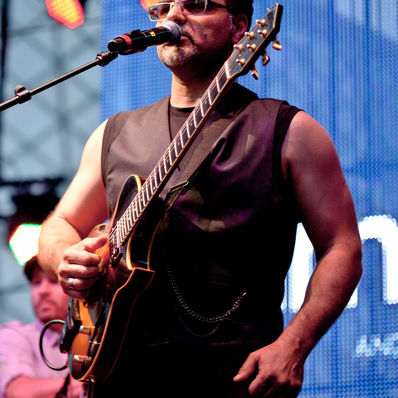 Touring his recent incarnation DMG, which evolved out of his acclaimed solo project. The result is his latest CD Sub Urban Gypsy! A core group sound, driving the new multi-lingual compositions towards the very essence of a world culture; breading a feeling of one world; no barriers and no divisions.

“His group is a perfect example of the world savvy musical product Canadian multiculturalism is producing. I had to introduce Dominic’s infectious global sound to Italy and my colleagues at the Universities of Bologna, Turin and Naples.” – Dr. Elena Lamberti, Ph.D (Professor at The University of Bologna -Italy)

“Dominic Mancuso's inspiring performance, at the Flato Markham Theatre, is a tribute to the depth and diversity of the Canadian Music Scene. His fantastic and unique voice brings to the audience all the colors of his ancestral Italy, supported by an equally excellent band. The audience loved it!” - Eric Lariviere, General Manage, Flato Markham Theatre

“Dominic's brand of world fusion is underscored by an infectious on-stage energy, zeal for storytelling and a voice that is nothing less than " lusty, emotive, and freighted with passionate sincerity." Graham Pilsworth, Atlantic Jazz Festival

“Dominic Mancuso is one of the most distinctive voices in music. He is a paramount storyteller; a premier Sicilian griot of these times. He wails with the best. He cries the blues from the depths of his soul — bringing great measures of duende to the music. His Juno Awarded Comfortably Mine is a rare album indeed, quite simply one of a kind.” ~ Raul da Gama, All That Jazz

“… Mancuso is the real sound of Sicily. His voice is robust and passionate and he wails in such a way as bring expressions like ‘Sicilian blues’ into mind…”
~ Stephen Pedersen, The Halifax Chronicle-Herald

“How can I choose among the high points of this show? The husky tenor of Mancuso’s vocals were so full of longing and gutsy bravado, casually, effortlessly in the centre of the pitch.” Tova G Kardonne, The Live Music Report