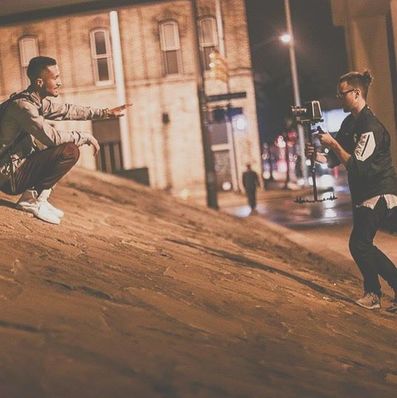 Chase Glass (MiL1) was born in Battle Creek, MI on December 28th, 1992, to a young interracial couple, but raised in a single mother household. 21 months later became an older brother/role model.
At 2 years old, Chase was diagnosed with E-Coli, one of the first cases in West Michigan, and placed in the hospital for weeks with doctors not too sure what to do. Chase's body started shutting down, and the doctors ended up telling his mom that she should start making funeral plans. But after weeks in the hospital, everything started turning around. Chase was given a one in a million chance at Life again. (MiL1 comes from the original name "1 In A MiL1ion").
His family moved to Kalamazoo where he attended school in the Gull Lake School District, which was a predominantly Caucasian school district. Chase and his brother were literally 2 of a handful of kids with a little more melanin in the district. This worked out in their favor with them also being smart and great athletes, but of course came with some negative feedback, racism and ignorance along the way.
After Chase's 7th grade year, his mom got a new job in Grand Rapids, MI. They moved and Chase attended school in the East Kentwood School District, which is one of the most diverse school districts in the entire country. This was obviously a complete flip for Chase, but he ended up standing out and fitting in instantly.
He was always interested in hip-hop, and the music that it came with. So in 2005 he started writing down stories, that turned into poetry, that turned into notebooks filled with lyrics he planned on recording eventually, but just didn't know how... until after 8th Grade when he found a little stick-looking computer microphone and searched the internet for something to record his voice in to with this microphone. He started using a free program that he found... --- Anyway, listen to "The Journey" by MiL1 to hear the rest of this story.
Fast forward to the present:
The Recording Artist/Writer/Engineer/Entertainer from Grand Rapids, Michigan. MiL1 has become progressively well known for his amazing music, creatively depth-filled metaphors, and versatility when it comes to changing up the style, all while remaining relatable to his listeners. Creating since 2005, and he's taught himself to engineer his own music, as well as promote himself in a professional manner. Writing all of his own lyrics, he's told every day that he has that "X-Factor" that separates him from everybody else.