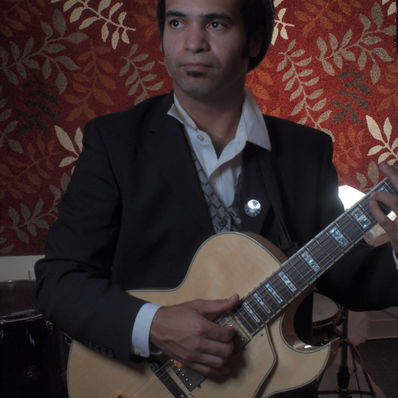 I started playing guitar at 15 after hearing Led Zeppelin III. I fell in love and only wanted to write rock music and practice until I heard "To the Stars" by Chick Corea. I began to study in earnest after hearing that album and realized music could convey as much information as words.

A couple of years ago I decided to commit even more than the 10-20 hours I spent a day with a guitar in my hands. I knew my thoughts, heart, and soul wanted to be made of music and the only way I ever knew peace of mind was to be creating or honing my skills as a musician.

I am now in the Commercial Music Program at USC Upstate working towards a bachelor's degree.

When I can I study with Karl Sanders of Nile. Speed and control are two cornerstones of his playing, and he has helped my right hand tremendously.

I am a guitar instructor at Greenville Music Academy. I love teaching, but not as much as performing.

In the last year, I have performed in several jazz groups, a fusion group (one gig with Jeff Sipe- awesome!), a blues/funk group, a hip hop group, sideman work with a pop-rock group (American Idol contestant Ali Henderson) in addition to some solo classical and jazz performances. I performed as First Chair with the Guitar Ensemble, soloist with the Latin Jazz Combo, and as soloist for the Upstate Vocal Jazz Ensemble in school.

I have also been creating original works for string quartet and guitar quartet in addition to spending a lot of time transcribing.

I am currently working on a demo and looking to be performing with as many different groups as I can.