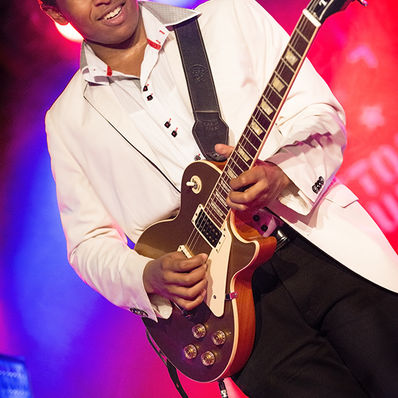 Solomon Hicks has been called 'Lil' B.B. King, EAST Montgomery, and King Solomon by fans Nationally and now Internationally.
He is the real deal... the next best out of New York City. Solomon has been in the biz since age (13). As the lead guitarist and performer at the
Cotton Club, with a 13 piece band. His 1rst cd "EMBRYONIC" at age (14) was
recorded with the 'Cotton Club All Star Band'
I am also at B.B. King's almost weekly, Minton's Playhouse, Terra Blues, The Garage,
Red Rooster, Shanghai Jazz (NJ), Jazzmobile, Settepani, Gran Piatro (Jazz on the 5th), Iridium, Ginny's and more in Harlem & the Tri-State area.
Harlem Arts Alliance and many other clubs. He has 2 cd's and is touring Europe and National Festivals.
I will be opening for the band 'KISS' from Miami to Jamaica Oct.-Nov. 2015 on the Kiss Kruse.
"CARRYING ON THE TORCH OF THE BLUES"
is my latest 2nd cd. It has many original songs, written, arranged and composed by SOLOMON.
This includes a big band/swing sound anthem for the Cotton Club.
"JUKIN' AT THE COTTON CLUB"
Jazz/Blues guitarist, singer and composer. An eclectic musician, I excel at a number of styles ranging from Jazz, Blues, Classical, Gospel, R&B, Funk and Classic Rock. I studied Jazz, Classical and Afro-Cuban guitar at Harlem's School of the Arts, Jazzmobile , Boys conservatory , Brooklyn Music Academy & and Barry Harris’ Bebop workshops.
Several newspapers and magazines have written about my extraordinary talents, including The Washington Post, New York Daily News. NY Times, Hartford News.
My story has also received coverage on ABC, PBS, CUNY tv multiple public access programs and radio stations like WBGO 88.3 jazz, WHCR 90.3
I have worked/played with artist such as - Neyo, Tony Bennett, Jon Hendricks, B.B. Kings Blues Band, Lonnie Youngblood, Winard Harper, Jimmy Owens,
Antoinette Montague, Mike Stern, Danny Mixon, Melvin Sparks @The Blue Note, Elvin Bishop, Jr. Mack
Cotton Club All Stars Band, JC Hopkins Big Band, Alex Blake, Apollo 'Live' & (4) yrs. of X-mas shows for them. etc...
I teaches music theory and beginner & Advanced guitar to all ages!
I taught music at the 'Crown of the Continent' guitar festival & camp, in Montana. Taught children at the Children's Aid Society.
I may be one of the " Keepers of the Legacy" of excellent music, lyrics & performances done with integrity & grace.