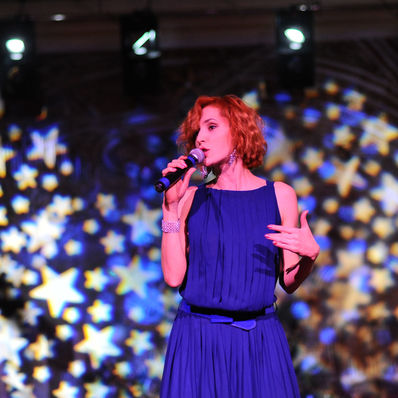 I entered the Theatre University at the age of 16 and was graduated as “Drama actress”. Then I was invited to Samara Theater and worked as leading actress in the theatre for 3 years. Theatre career started with the musical performance “The Sound of Music” in 2003, where I starred with the part of Maria Rainer. Later I starred in many other performances (Amadeus by Peter Shaffer, The Venetian Twins by Carlo Goldoni etc.) Then I fell ill with the serious disease and had to choose what I wanted to give my life to. I understood theatre was just part of my life, but music was my life. It was the time for changes. I moved from this city in the center of Russia to Moscow and started to break through, building up my career. It was hard with no connections and acquaintances. Now I’ve achieved certain results, but don’t want to stop. I’ve learned Spanish and English languages. I’ve had vocal lessons to improve singing skills. I’ve learned a lot of World greatest songs to work in other countries and in 2014 had my first contract in Spain. I have created cover band Vernisage and we have some performances at various events. I sing in different styles, make staged performances, lead the teenage theater studio, am member of jury at theatre festival, dub-in series and films. I have many interests but always I have had a dream to create my own songs and album, to share it with people, though I haven’t had this chance yet. My experience gives me the unique feeling of the songs’ content. I share heroes’ emotions because of my natural feeling and theatre school. Stage is passion I live with. And as I always tell “Real art harmonizes the space, creates whole generations of kind, thoughtful, peaceful, and honest and just people. I think it doesn't matter what you do in art and who you are: singer, songwriter, actor or dancer. God gives us talent and I think talented person doesn't belong to himself. He belongs to art. So he should bring God's will to the world”.