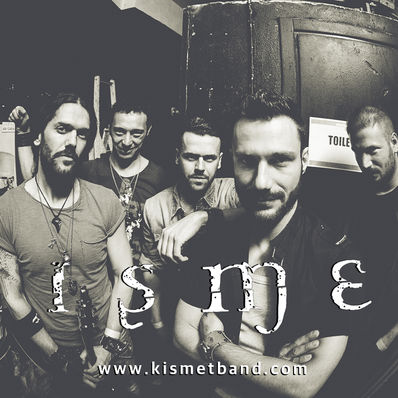 Kismet is an italian alternative rock band formed in the late '90s.
In the 2001 the band recorded his debut Ep “Rooms Of Lie”,
The press really appreciates the work with so many positive reviews and title of “Top demo” ('Metal Shock', 'Rock Hard' and 'Metal Hammer') and many credits in other important webzines and fanzines.
Thanks to this great feedback the band starts a very intense live activity in many important italian club and local festivals.
In the 2006 Kismet entered the NFRS studio with the sound engineer Ugo Bolzoni for the “Trudging Down Your Soul” sessions, and the result is a “grunge” rock sound with some psychedelic influences, where lyrics run through a metaphoric 'journey of life'. Unfortunately a change of line-up retarded the release of the Ep and only the 14th of september 2007 Trudging Down Your Soul has been presented in the beautiful atmosphere of “Palazzo Pepoli” in Trecenta, the hometown of the Band.
This marks a new age for Kismet that started to play both acoustic shows, in small venues and clubs, and electric, in important italians live club (Zoo Animal sound, Magic Bus, Renfe, Tempo Rock) italian and european summer festivals (worthy of note: Postbloo Festival – Greece, Bikerfest Trecentallora supporting Pino Scotto) as guest, supporting act and headliner.
To report the appearance in the transmission “Sala Prove” on Rock Tv with the new single We Don't in 2009.
In the recent years Kismet worked hard in the pre-production of a new full length and a more rock/heavy oriented song.
In november 2011 the band won the Final of TourmusicFest at the Piper Club in Rome as “Best Original band" and thanks to this contest the band get the chance to touring the Uk for a promotional tour.
In the july 2012 the tour started and the band promoted their last ep "We don't" (DA RECORDS) over the Uk (London, Sheffield, Birmingham, Wakefield, Crumlin) and the tour culminated at the O2 Arena in London where the band was a special guest for the LIVE & UNSIGNED FESTIVAL.
The Uk called the band also in november for some gigs in North England especially in Manchester (Bury), Liverpool and Lancaster for the Lancaster Music Festival.
In the 2013 the band begun the recording session for the new album at the Putrefashion studios with Pablo Benedicto da Villa as producer.
During the recordings the band don't stop their live appearance and is worthy of note the mini tour in Berlin for a couple of gigs at the White Trash club and a special live at the Theatre Ballarin in Italy at the end of the year.
In the january of 2014 the band signed with the label Dust on The Tracks Records for the release of the new album "Shades of Clarity"
The 28th March the band was the supporting act for the sold out show of The Pretty Reckless in Milan, playing some preview of the brand new album Shades of Clarity
OFFICIAL LINK:
www.kismetband.com www.facebook.com/kismetband www.youtube.com/kismetband www.twitter.com/kismetband