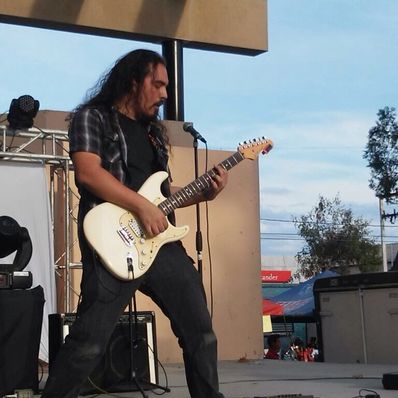 Hi, my name is Ivan, i'm from Coahuila Mexico, in a town near the national border, my story in music starts as many others, a high shcool kid that fell in love with music, got a used guitar and amp and started practicing but in my story i began playing metal and only metal so naturally i had a little chance of where i could develop more music skills, i was in your tipical bands of teenagers wanting to play cover and have a good time but i wasnt happy with that, i wanted more i had a more professional goal, i wanted and i still want to be a skillfull musician so i started looking for a group of people with the same goals as mine and in the meantime on of the biggest opportunities in my life appeared, through my family i got to know a band formed by retired touring and professional musicians!!! So that was my chance!! I got in and became part of the band "Oxido" (this translates to "rusted") and so started to learn all that i could, the lead guitarrist tuaght everything that i know about music, i heard anecdotes of the worst things that could happen while playing and the best things that can happen while performing around the country! But there was a problem with this awesome and talents band, the reason why they retired, the reason why know they only want to play covers... They no longer trust or believe in the music industry they think that its dead and thats its impossible to live our of music anymore.

So there was another obstacle in my goal of being a high qulity musician could stay with them and keep learning but i wouldnt be able yo keep going forward so i decided to so both!!
One day i good friend of mine aproched me with his twin brother and offer me to start a band of more popular musica but with some blues and rock thrown in the mix, and thus "Elite" started, today i play with Oxido and Elite, this way i learn and get experince with Oxido and i cant combine it with what i learn with Elite.

And Elite its gettinf bigger!! We alredy have five originals, and tons of covers. Oxido its getting more and more dates and we play awesome metal songs.

So at the end i did a hanna montanna and got the best of both worlds! Hahaha!