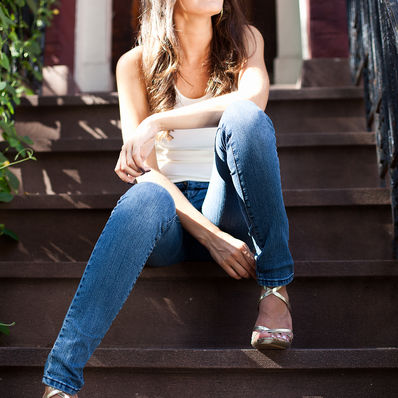 My name is Angelika Shatulina. I am a 26 year old singer and songwriter from Moscow, Russia! Russia! I am very passionate about creating and performing music. Music is my life!
I was born in Saratov, Russia. At the age of 5 I attended Music School No.17 where I studied music literature, composition, vocal training, participated in the choir, and learned to play the piano. After graduating from music school, I attended Saratov College of Music where I concentrated in pop and jazz vocal. I won many music competitions as a singer. After graduating college I decided to move to Moscow. Moving to Moscow had a major impact on my journey in music. I met a great musician and we started a band together. We played cover songs, wrote our own original songs, and gave many performances. During this time my music mentor also moved to Moscow which gave me the opportunity to continue with my vocal training. In 2009, I studied music production at Moscow University of Industry and Finance. In 2010 I was a finalist in “Putevka v Zhizn”, a competition produced by Russian Music Box TV. That year, I also studied English at the American Language School in Moscow to prepare me for my 2011 trip to New York City to study English at the Rennert School in Manhattan. I received voice lessons at the Kaufman Center with Tardo Hammer and Ingrid Zeldin. This was an incredible experience and I met so many talented musicians.
I won a singing competition for AutoRadio Russia. I won a reality show hosted by Russian Pop singer Anita Tsoy called "Talent in a Million". This competition featured creative and talented people from all over the world. I also had the opportunity to perform on the main stage of the Olympic Stadium with legendary Italian group Ricchi e Poveri in front of 50,000 people. This concert was broadcast on Channel 1 in Russia on New Year's Eve. This year, 2015, I continue to perform regularly and have many scheduled performances with my band.
I believe music is an international language that can bring people from all over the world together. I look forward to the opportunity to further develop my musical talents. Isina it's a great chance for all musicians and also for me!