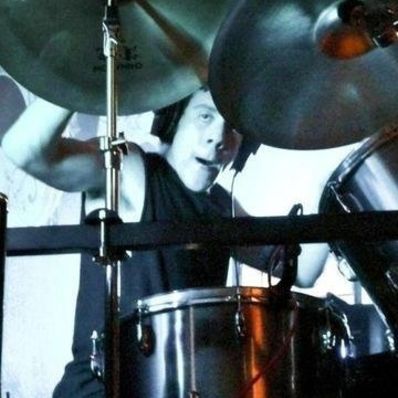 Dan Kashuck made things happen for himself and his drumming career when he moved to Chicago in the summer of 2006 where he worked his way up through the competitive Chicago music scene. After landing several spots in some heavy hitting bands in the city, he finally landed hismelf a spot in the hard hitting band Seven Day Sonnet which would take his touring/recording career to the next level. After signing with Big Time Records/Universal in 2010, Dan went on coast to coast U.S. tours supporting acts such as Sevendust, Theory of A Deadman, Sick Puppies, Disturbed, Saliva, etc, plus several headlining tours. He also got the first opportunities to record with Platinum selling producers such as Johnny K and Sylvia Massy who both praised his drumming in the studio. The first independent album Dan recorded with Seven Say Sonnet prior to signing a record deal was with producer Brett Hestla where he was able to record the entire album in one 8 hour day (11 songs). Hestla said it was the most efficient tracking for the level of difficutly he'd ever seen in his studio. After 3 years of consisent touring and recording, Seven Day Sonnet split up due to artist-label conflicts of interest that could not be resolved. It was at that time Dan would make the bold move to Los Angeles in the spring of 2013 to further his career. Since moving to L.A. Dan has been working hard as a session drummer for several talented artists and bands from both the U.S. and overseas. He has also gotten to work with several more amazing producers such as Don Gimore, Skip Saylor, Matt Packuko, Chris Yonzer and more. Dan is coming fresh off a summer long U.K. tour with British rock band Laburnum who after discovering Dan's talents after hiring him for two important showcase gigs in L.A., decided to fly him out for a 3 month U.K. tour. Dan is continuing his hard work as a session player in L.A. always striving for that next big opportinity. Dan works hard everyday on his skills in becoming one of the most versatile and expressive drummers out there. He also has goals of being a musical director one day with all his experience in running live programming behind the kit with several artists and bands the he's worked with. Learning a lot from his experiences thus far, Dan looks to continue his pursuit of knowledge and experience through hard work, sacrifice, dedication, practice and willingness to do whatever is neccesary to get to where he wants to be.