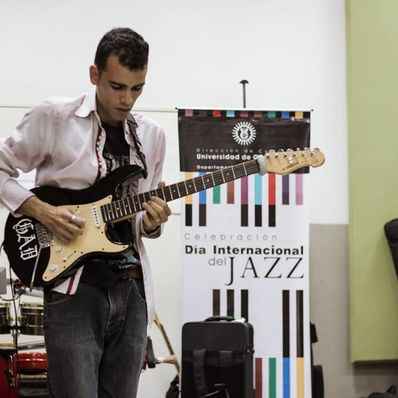 born in Maracay land Argueña one 27 December 1989, from an early age was involved with the fascinating and wonderful world of music by his father José Gregorio Castillo and his mother Sorlly Velázquez. Well, at the age of 7 he began to participate in various cultural events in schools with Creole singing and folk works, so grew his passion for music and in particular the electric guitar.

We never played a guitar until 16 years of age when making the decision to start studying the instrument and study music as such. Received his first music theory classes with Alexia Cervellón teacher and her first guitar lessons at the Academy Music Without Borders, although only saw two guitar lessons. After six months on your own Music Tech enters Valencia (TMV) where he deepened his knowledge in theory and instrument graduating there in 2009.

After graduating from the TMV he received private lessons with the great guitarist Luis Viera, into the world of jazz and receiving techniques and advanced knowledge and Harmony classes with Professor Franklin Garces.

He has participated in numerous festivals events which we can cite the Naguajazz festival and II encounter Jazz among friends with Criollito Jazz in the XII festival of jazz UC Facul Jazz, who also held the first concert of the International Jazz Day at the Mall Omnicentro (The Carabobeño). I travel the Venezuelan ambassador folklore in Milano (Italy) and various cities and towns of Poland, participating in numerous events and festivals as a guitarist and arranger with the group Danzas Mariara.

Today we can say that José Gabriel's guitarist with over 7 years experience in music as a composer, arranger and performer of instruments: Guitar, Classical Guitar, Electric Bass, Drums, Venezuelan Cuatro.

He is recognized as an innovative guitarist and with a particular and fresh style dominating a variety of techniques such as tapping, sweeps, harmonics, among many others and also dominates variety of styles within the Venezuelan and foreign music as laitna.

Is currently working as professor entire guitar chair in the Academy CEDECAM, and also works with the National Orchestra, project PSB.