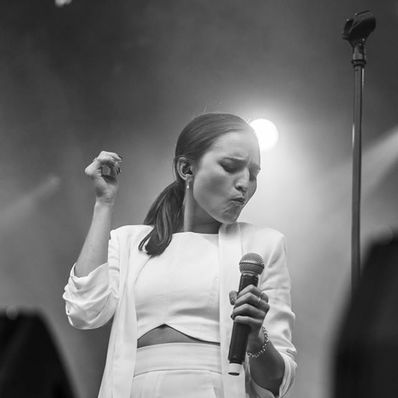 Smoky voice, piercing eyes, she's the new irresistible blue­-eyed soul sensation. In her interpretations, Typh Barrow reveals a complex personality and a touching fragility : a fear of the passing of time.

Even at a young age, she had an unusual and unique voice, so much so that people would call her 'Sir' on the telephone. She started piano at the age of 5, solfege at 6 and wrote her first songs at 12. Songwriter, author, instrumentalist, performer : the young artist is a woman of many talents.

She remembers the discovery of Stevie Wonder’s song 'Master Blaster' as a particularly keymoment for her. While listening to the song, she damaged her father's old collectable turntable. From then on, she had to use it secretly. This is how she trained her musical ear, listening to the vinyl records of Bill Withers, Eric Clapton, The Eagles, Marvin Gaye, Randy Crawford and BobbyMc Ferrin.

She has been carrying her piano around with her on stage, in bars and at festivals since she was 14 where she was spotted by her manager. She recorded her first studio tracks at 16 before joining the Jazz section of the Royal Conservatory of Brussels.

In 2013, her voice failed in the middle of a concert because of a cyst on her vocal chords. Keen to avoid the operation, which could risk changing her tone, she chose not to speak at all for a whole month.

Today she is back on great form and has just launched a brand­new concept : a double EP with two different but complementary opuses.

Blurring the lines between pop, soul and jazz, this project with its powerful sensuality is a real gem that makes Typh Barrow one of the best discoveries of this year.