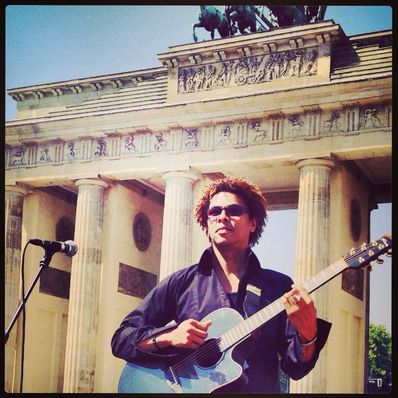 I'm from Memphis Tn. (south Memphis). I came to Berlin shortly after graduating High School were I sang in the Choir. My Dream was to be a commercial airline pilot but due to my situation growing up in Memphis, this didn't seem to be a possible dream. There was nothing good to go back to in Memphis so I stayed in Berlin.
I started working in Night Clubs collecting the bottles and glasses during the night. Unable to speak the language, this was the best job I could get.
I started singing House Music in the clubs in Germany in 1996 and that went very well.
I started a Cover Band in 2000 and we worked until 2010 for Corporate Events & Galas. Even had the chance to work with Kool and The Gang in 2008.
I started to learn how to play the guitar at age 38. This was/is a life changing decision and cuts cost on Therapy :-). I've discovered my voice new and my ability to write songs. I've been writing since. I've demoed 5 tracks with guitarist Eric Gales in Memphis in 2014. The rest is yet to be written...