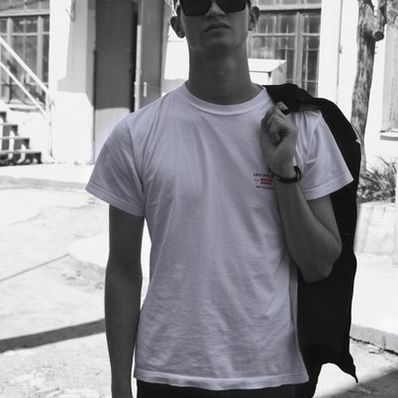 My name is Roman Ilchenko .I'm 17 years old .I live in Simferopol, which is in Crimea . Love of music I had in childhood .All my free time I devoted to music and playing the guitar .How it all began? I watched videos of concerts of various rock bands, and more attention paid to guitarists of course, I looked and I longed to repeat what they did with the guitar I like it that .And i remembered where the house lay the old acoustic guitar of my grandfather .I found her confused and began to play something .There is nothing good I could not get on it because there were only three rusty strings. Some time later I decided to take the case more seriously and enrolled in music school .My parents gave me for my birthday a beautiful white acoustic guitar and then I began to work .I dedicate all my time guitar and music .I wanted more and more to know about all this .Listening to the old albums of cult rock bands .I became more and more inspired .Three years later, I graduated with excellent grades five classes externally. And I moved to another city that would be studying .Now I more professional playing guitar, including the electric guitar .I write the lyrics and perform them on the guitar . In addition to guitar, I even became interested in writing electronic music, and different melodies using my computer. I very want to learn to play the piano .I really wanted to create a band and gave it to her completely, but unfortunately in my city there are no right people who share my intentions .I like to give people music that comes from the depths of the soul. Find a decent team of people with whom i can perform on the stage .But for now its just a dream. I'll go to sleep and wake up thinking that my talent who would notice and help me open it. Music has made my life brighter, and I hope mentors ISINA noticed among the huge number of talented people and made me believe in miracles.