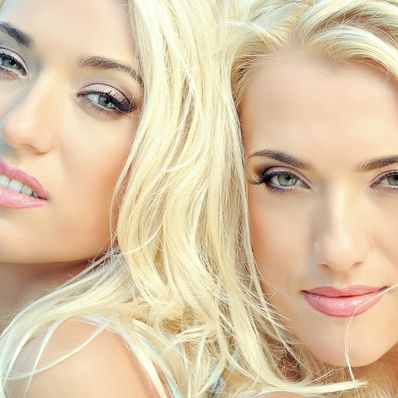 We put our hearts & souls in the songs. Our music is filled with love and ambitions, which we want to share with you. - Malgivski sisters.
Sisters (twins) Ulyana & Natalya Malgivski are Ukrainian singers, with many accolades from international competitions and music festivals. The sisters were born on March 24th in Ivano-Frankivsk region of Ukraine. They began singing as a duo in 1996, and less than a year later were recording with the composer О. Аlbul at record studio "Melos". They soon found more success with records, radio broadcasts, concerts, and the release of album " Vsya Rodyna Kolyaduye," which became the theme for a musical (in collaboration with Оstap Stahiv). With their success, the twins moved to Kyiv where they graduated from Kyiv National University of Culture & Arts with degrees in pop singing (class of pop star Oksana Bilozir). During their studies Malgivski sisters had a great music collaboration with Oksana Bilozir and appeared multiple times as guest singers at Bilozirs concerts.
Malgivski sisters have been recipients of many awards, including: "Chervona Ruta","Perlyny Sezonu", "Future of Ukraine" (Maybutne Ukrainy)" (Lviv) under aegis of "Tavria games","International Hutsul Festival","Melody of Two Hearts," "Pisennyi Vernisazh", "Zoloti Trembity" ( I-Award) Morshyn - Kyiv and many others. The twins were also honored guests at many festivals, including the:"Na Krylah Dytynstva"(Lviv),"Slavianski Bazaar "(Belorussia, Vitebsk),"Premier League Pop Festival "in Rivne,Ukraine), TV Show "Hit-Bazar","Step to Stars"," Our Song ","Rzhyvchiv Chaplet" in Trypillya ,Ukraine ),The International Festival of Young Performers of Modern Song " Moloda Halychyna",(Novoyavorivsk,Lviv) "Pshenychne Pereveslo" Folk Festival (Мoldova, Pridnestrovie ) , The "Lemko Vatra Festival" ("Bonfire") (Zdynia,Poland ) ,Ukrainian festival of Lemki culture "Dzvony Lemkivshchyny"(Ukraine)," The Festival of Rusyn -Ukrainian Culture in Svidnik, Slovakia
In 2005, they recorded a new album " Dva Berehy" with Atlantic Recording Company, and soon headlined their own tour to promote their new album. In 2006 Malgivski moved to the United States, and toured throughout the country. The twins were honorable guests singing at "Ukrainian Days of Chicago" and "Ukrainian Sunflower Festival" in Detroit, and represented all Ukrainians at "Christmas around the world" (Chicago). In 2007- 2008, the twins started a project of Ukrainian Folk songs accompanied by acoustic guitar with Bohdan Buchvak, and soon started working on a new album. Malgivski were the first Ukrainian singers to perform a solo program at the Illinois State Fair Ethnic Music Festival (Springfield USA). Others performing at the festival The guests of the festival were wold known stars like Fergie, ZZ Top, and Natasha Bedingfield.
In 2009, their song "Winter in your eyes" won in the Looking for Producer contest (Kyiv, Ukraine). Their song received a record number of votes for the show. They also performed at: Lemkivska Vatra"(New York),"Lifeway Festival "(Chicago),"Uketoberfest"(Chicago),"European Festival Musiс and Sport (New Britain CT USA), "Taste of Polonia"(2012).
In 2014 Malgivski sisters started working in collaboration with "Voxo Music Label" (Chicago& Los-Angeles) and recorded a song "Dance with Me" which was listed in Top Music Charts in Europe,South America.