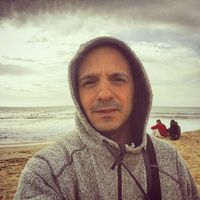 Filipe Ferin is an artist from Portugal, a songwriter of folk music. He started to write songs back in 2006 when he made his first contact with songwriting. In 2007 he released a song “Africa” with a Jamaican singer, a duet between the Portuguese and the Jamaican language. He have recently released a folk song “I Will Wait”with a Canadian artist Alexi Cowman, a sweet duet. “A Modern Tale” is his first EP with 9 songs released in 2016. “The End’s Magic” is his second EP with 5 five songs of folk released in 2017 and still in 2017 “Third Signs” counts the number 3, an EP with 8 songs.